I received an e-ARC of Coral by Sara Ella!

“I received a complimentary copy of this book. Opinions expressed in this review are completely my own.”

So for those who haven’t heard of Coral, coming out in December ’19, here is a quick blurb: 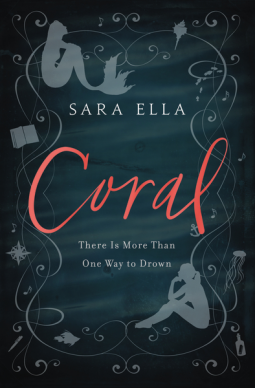 Taking a new twist on Hans Christian Andersen’s beloved—yet tragic—tale, “The Little Mermaid,” Coral explores mental health from multiple perspectives, questioning what it means to be human in a world where humanity often seems lost.

There is more than one way to drown.

Coral has always been different, standing out from her mermaid sisters in a society where blending in is key. Worse yet, she fears she has been afflicted with the dreaded Disease, said to be carried by humans—emotions. Can she face the darkness long enough to surface in the light?

Above the sea, Brooke has nothing left to give. Depression and anxiety have left her feeling isolated. Forgotten. The only thing she can rely on is the numbness she finds within the cool and comforting ocean waves. If only she weren’t stuck at Fathoms—a new group therapy home that promises a second chance at life. But what’s the point of living if her soul is destined to bleed?

Merrick may be San Francisco’s golden boy, but he wants nothing more than to escape his controlling father. When his younger sister’s suicide attempt sends Merrick to his breaking point, escape becomes the only option. If he can find their mom, everything will be made right again—right?

When their worlds collide, all three will do whatever it takes to survive, and Coral might even catch a prince in the process. But what—and who—must they leave behind for life to finally begin?

Clearly, one reason is more adult than the other. Did I feel like I got what I came for? Yes, because hello, MERMAIDS.

I’d call Coral a hard-hitting contemporary with an essence of magical realism. In real life I’m close to people who struggle with these sorts of problems and so I felt the topics were handled well in the story and it was insightful.

The story has three points of view it jumps between, Merrick, Brooke and Coral (the mermaid). All three POVs seem unrelated at first and so the book does require some patience, it’s not massively fast-paced but a story that lets you get to know the characters and makes you root for them to solve their problems.

Coral is our fantasy element, a mermaid who is worried to feel because that’s not what mermaids do.

Merrick is struggling to mend his broken family, or at least the pieces he cares about and tries to do the best he can.

Brooke is struggling with depression and perhaps the hardest point of view to read but the people she meets throughout makes it so much more rewarding to read about as we see how they affect her as a character.

Overall the story comes together like a puzzle, which makes it a fulfilling read at the end. I loved it by the end, it’s one of those novels that’s a journey. Sara Ella handled the topics brought up well. I seriously loved the book quotes Hope and Brooke share, they’re from modern stories like Divergent and it made the characters feel more modern and rooted in the real world.

On another note, why is this blog a little quiet?

I’m mainly active on Instagram as Ensworldofwords. I talk about bookish things nearly daily and take loads of pics, so go take a look! I’m updating my blog when I read mostly ARCs and updates about my own novels.

Love the mermaid featured? It’s a custom by UndertheSeaCrochet on Etsy. You can also find more examples of her work on Instagram. Use ENSWORLD15 to save on a mer of your own! 🙂